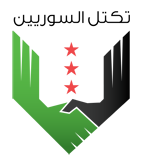 After many attempts to abort the Syrian revolution, we want the Syrian bloc to emphasize the objectives of the Syrian revolution and work to achieve them.
One of these goals is freedom, democracy and the elimination of tyranny in all its forms now and in the future. .
We are working to make Syria a country for all Syrians, with all their sects and nationalities, to prosecute war criminals and all those who committed crimes in Syria so that the Syrians can live peacefully through the application of transitional justice after the demise of tyranny.